Activists on the road of second revolution 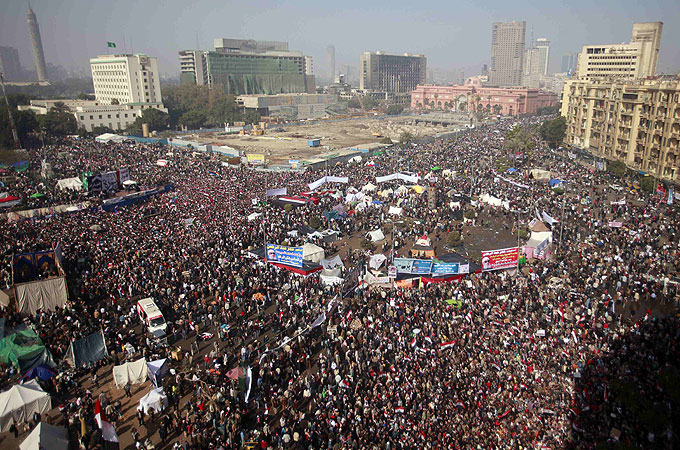 “Is that possible?” They don’t even ask themselves, they are now more sure, than they did before one year ago.25 january is not an anniversary for them, they are planing – in public – for another revolution.

Using facebook, twitter, & other social media, bloggers calling for bre revolution events. “The street is belongs to us” activists who increased wildly after jan25, when politics became a public affair for a huge sector of Egyptian youth, quoted this statement from Youssof Shaheen’s 70’s revolutionary movie “Awdet ElIbn ElDal” for referring to every single street event, defending for the right of peaceful protesting, and using this right as pressure card to face the authority.

Activists re-establish a new relationship with the street again, follow mostly the same steps before 25th jan of 2011, back to streets champagnes, kazboon, slasel elthawra, & mobilizing people for one goal in a different slogans. They learned the lesson, after they lost their real power which comes mainly from the street, & people believes, when they turned to play a political role after 11feb with supreme counsel of armed forces (scaf), elekhwan, & the other political parties, then they fall in a mistake after the other, which put them finally in a bad situation.

First of all they thought the message had been clearly delivered, to the people & scaf, while pebole considered the revolution had ended when Mubarak stepped down after 18 day protests, & scaf put himself as a higher and the only authority in the country. & when activists realized the big mistake, they decided to protest in the squares surrounded by police, armed forces, unhonest media, & people mixed feelings. Then the divided to liberals, socialists, & Islamist, what it had leaded to divide their efforts too.

Days became a weeks, months pass, & elections became a disappointing fact, as long they didn’t planed well for this battle, all political parties missed the union plan to establish a stabled, balanced parliament for a new modern civilian country, in the same time lot of issues still suspended, like Mubarak trial, martyrs families rights, & putting the activists in the jails, that’s leads for bloody clashes in the end.

Clash after the other, activists take a steps to gather their efforts against scaf the new enemy of revolutionaries, & become more closer to the people, who waited for another reasonable explaining, from revolutionary, away enough from third hand propaganda machine.

This propaganda which people won’t buy it forever, as long it’s so week & irresponsible explaining for bloody clashes at Tahreer and Mohmad Mahmoud st, & the bloody occupying Cabnet protest.

In the other hand revolution demands now is more clearer, activists now using graffiti, prints, with social media to reach the ordinary citizen. That’s like a start from the beginning, as well activists think that the revolution hadn’t started yet, so they are not calling for second wave of revolution, but they calling for new anger revolution, that anger probably comes from the martyrs blood, and first revolution disappointing results.